In South Asia, women's movements are located precisely among the westernized urban middle classes. Owing to the centralization of women’s movement around the issues concerning the relatively privileged among Indian women has led to rise in dalit and indigenous feminist leadership looking at the issue of gender through intersectional lenses of caste and tribe locations. But the fact that many choose to ignore is that there lies a large number of women in India for whom political representation is a distant dream. Tribal women of India for that matter constitute a large section of the women who still do not have enough political representation or participation. Within this context, the struggles of Indian tribal women against class and gender inequality acquire particular significance. The notion of "indigenous" is especially significant here for tribals are considered India's earliest inhabitants. Moreover, tribal women's resistance has generally occurred quite autonomously from urban feminist movements.

The recognition of the feminist leadership among the tribal people who constitute a large, heterogeneous segment of Indian population is an important aspect in understanding feminist resistance in India. In this context, the usage of women’s bodies as sites of violence as well as protest under political conflict is an area that is often less explored.

I would like to draw the attention of our readers to an Act that is draconian in its rule and has been a symbol of state oppression in most of Indian states under political conflict. Along with the fifth and the sixth schedules of the constitution for administering over the areas where tribal population is high in numbers, the government has imposed Armed Force Special Powers Act of 1958 or AFSPA in several tribal majority areas of India to deal with the insurgent groups and internal disturbances of the country.

AFSPA: A History of Violation and Violence

The powers that AFSPA confers on the armed forces come into force once an area subject to the Act has been declared “disturbed” by either the central or the state governments. This declaration is not subject to judicial review.

Saikia notes the various violations of the constitutional rights that are permitted through various sections of the act. Human Rights Watch’s 2008 report named ‘Getting Away With Murder’ details the violation of the rights permissible in the specific acts. “The right to life is violated by section 4(a) of the AFSPA, which grants the armed forces power to shoot to kill in law enforcement situations without regard to international human rights law restrictions on the use of lethal force. Lethal force is broadly permitted under the AFSPA if the target is part of an assembly of five or more persons, holding weapons, or “carrying things capable of being used as weapons.” The terms “assembly” and “weapon” are not defined.

The right to liberty and security of person is violated by section 4(c) of the AFSPA, which fails to protect against arbitrary arrest by allowing soldiers to arrest anyone merely on suspicion that a “cognizable offence” has already taken place or is likely to take place in the future. Further, the AFSPA provides no specific time limit for handing arrested persons to the nearest police station. Section 5 of the AFSPA vaguely advises that those arrested be transferred to police custody “with the least possible delay.”

The right to remedy is violated by section 6 of the AFSPA, which provides officers who abuse their powers under the AFSPA with immunity from legal accountability. This section of the AFSPA prohibits even state governments from initiating legal proceedings against the armed forces on behalf of their population without central government approval. Since such a sanction is seldom granted, it has in effect provided a shield of immunity for armed forces personnel implicated in serious abuses.

In practice when AFSPA violates the ‘right to be free from torture and from cruel and degrading treatment’, various incidents of atrocities cloud our minds and most of them entails heinous crimes committed against women be it the mass rape of the women of the village Kunan Poshpora in Kashmir or the custodial rape of Thangjam Manorama in Manipur. This piece focuses on the latter incident and how women of Manipur has been a consistent and significant force in the protest against AFSPA.

Manorama and Beyond: Protest and Women’s Bodies

On an early July morning in 2004, Thangjam Manorama’s mangled, bullet-saturated body was found dumped on a pavement outside Kangla Fort, which headquartered the Assam Rifles battalion in Manipur. Her custodial killing mirrors the fate of many Manipuri youth taken in for ‘questioning’ by the Indian Army for alleged links with ‘militant’ outfits, reported by Amnesty International. 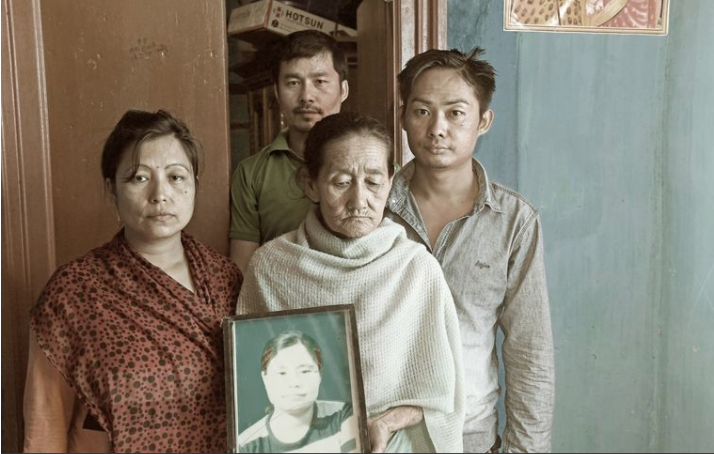 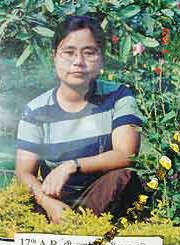 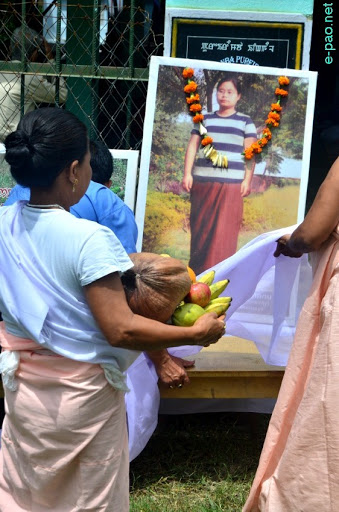 Picture Credit: This Week and Epao

The brutal execution of Manorama led to widespread demonstrations across the country.. The voices of protest unequivocally demanded denunciation of the Act. However, this convergence cannot be understood as anything but strategic; disparities in political convictions have always complicated the dynamics of this historic conflict. The consistent erasure of Manipur by an apathetic and forgetful ‘mainland’ India provides the impetus for several ‘insurgent’ groups demanding autonomy. Caught in the crossfire between the Indian Army and various (internally sparring) anti-state groups, the people of Manipur have become targets or simply ‘collateral damage’ of the conflict.

The Northeastern region of India has been isolated and marginalized economically, socially and politically for a long time. This subjugation has been continued by the post independence Indian nation-state, which has systematically concealed the mainland violence committed upon the region in annexing princely states that received their own independence from the British. For instance, in a disavowal of Manipur’s sovereignty, the Indian Government (in 1949) placed the King under house arrest and forced him to accede to India – a violence enshrined in the formative moment of his ‘Indian’ state.

other states of North Eastern region, emphasizing on the fact that the face of the coloniser has been changed to the British kingdom to that of the Indian state. The nationalist Indian state has become embedded in the popular imagination, erasing the history of forceful appropriation of territories and communities. One does not get surprised at the silencing of protest against Indian state in these regions by the bullets and batons of the Indian Army. Voicing resistance, both rationally and legally, in this context, becomes an immensely difficult, if not impossible, task. In such a situation, the protest against AFSPA by women of Manipur deserves special mention. There have been frequent protests by women, in strikingly passionate ways, against injustices related to the conflict, and the names of Meira Paibi (Women Torch bearers) and Irom Sharmila are of utmost importance in this context.

Out on the pavement, Manorama’s corpse bore the marks of the violence of the state. Her

impossible to even ascertain whether she had been raped or not. This allegedly was done to hide evidences of rape by the army. Her death bore testimony of the most terrifying kind, to the savage brutality of the security forces. The most vocal and visible protestors in the wake of this incident were the Meira Paibi, a women’s organisation, who grief-stricken (when all outcries went unheeded by authorities) stripped naked and marched to the gates of the Army Headquarters at Kangla Fort demanding justice.

Kangla fort, the base of Assam Rifles was previously a base of the British Army. Symbolic of

oppression faced by the people, it witnessed 12 naked women rattling the gates of the fort screaming ‘Indian army rape us’ and a huge white piece of clothe with these words written in blood red, the same color in which Manorama’s corpse was covered in, out on the footpath outside the fort. Gaikwad compares this way of protest with that of Dopdi of Mahashweta Devi’s story Dopdi, a tribal woman, raped in the police custody for her alleged involvement in the Naxalbari movement, by order from Senanayak (loosely translated as the leader of the forces), and her refusal to wear any clothes after that, proud in her dark skin and her bloodied genitalia, something all women are taught to hide, feel ashamed of, and something that is attacked by the patriarchal nature of oppression almost invariably. As Dopdi terrifies the Senanayak and his assistants, who have inflicted violence on Dopdi, the protest by Meira Paibi also uses their body as site of protest as that of Manorama has been the site of violence and that evokes nothing but terror.

In examining women’s bodies as sites of performing violence and subverting the same violence in protest, we definitely need to look at the difference between Dopdi and the Meira Paibi’s protests. Apart from the literary and the real life origin of the two scenarios, Dopdi’s refusal to don her clothes even after having suffered violence shakes the very foundations of the paternal nation state. The patriarchal idea that the honor of the woman resides in her body and once violated they are destined to be ashamed of their body and themselves, is broken into pieces by Dopdi’s subversion of the moralistic ideals about women’s bodies perpetuated by society. This act of ultimate resistance makes her a woman the society cannot contain or tame into becoming a broken victim who accepts defeat. The revolutionary spirit of her act makes her a terrifying figure for the patriarchal society and the paternal nation state

But Meira Paibi’s protest is situated on the basis of the idea that women’s bodies are chaste and sacred and there must have been horrifying instances of violence to render them desperate enough to run the streets without clothes. Dopdi’s choice to renounce clothing was a way to challenge the notion of chastity and morality around women’s bodies, but the protest method of Meira Paibi has its very foundation embedded in this idea.

It has been 16 years since Manorama’s killing in the hands of the Indian state. In these 16 years there has been countless instances of extrajudicial atrocities done by the Indian state forces, all in the name of curbing insurgency and national security, while the people accountable are given immunity, and often are rewarded by the Indian state for committing violence on who the Indian state considers “Other”. The state has devised newer ways of perpetrating violence through NRC, by stripping its unfavorable citizens of their citizenship and conferring upon the nomenclature of “Foreign intruders”. Detention camps are being built across the country, and a rise in ethnonationalism is further giving way to ethnic cleansing powered by the Indian nation state in the border states of India. There is an earnest need for the discontinuation of AFSPA as well as the draconian NRC to keep India as the democracy as it is claimed to be.

Dyuti is a feminist researcher and writer based in Delhi. Her work has largely been centered on women and health, violence against women, feminist internet, sexuality and mental health. She is a graduate of TISS with a masters in New Gender Studies.

Looking Back in Anger: Shifting the Grammar of Colonial/Western Pedagogies

Anganwadis of India - Tackling Malnutrition in a Pandemic

Who knew Racism would be a result of Covid-19?